Who Has the EDGE

Thanks all the advice and the fast turnaround in getting me everything. The 2 sets of Bauer Tuuk LS Pulse Edge DLC with the engraving looks great. I really like the blade pouch, chamois and gummy to keep the blades looking and feeling good.

Holding the edge very well. So far I have played 5 games and with carbon coated blades they had to be ground after 2 games. Very pleased.

Needed a set of blades quickly. Tydan was able to get us a set in 24 hours. My son loves them and wants them for future skates as well.

The blades are great. Highly recommend.

If you wanna unlock your C cuts and get in butterfly faster. Try the Spry J. I had it both on XSG and VERTEEX holder and it is amazing.

Does the job on coated steel, has a nicer texture than others I’ve used. Combine it with a leather cloth for best results. 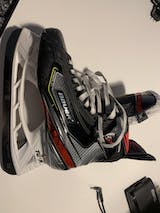 This blade storage runner is fantastic and easy-to-use

The DLC blades hold an edge at least 3 times longer than normal steel, and when you do sharpen them they need far fewer passes to bring them back.
Thanks for the advice, the CagOne profile is excellent ! 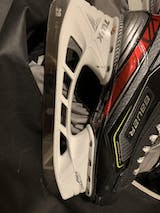 These blades are phenomenal. Arrived very quickly and were sharpened perfectly. They look great, too!

Hands down the best skate service out there. Questions were answered promptly and professionally. I was so impressed with the service and quality of the product I ended up ordering two sets of steel (profiled) and will be sending them out for their sharpening service. Incredibly fast turnaround time. Shout out to Zach for being so helpful!

I'm an older beer league player but still hitting the ice 2-3 times per week. 6'4" 250 lbs. on D. Blades that came with my skates seem to dull, burr/nick up fairly quickly and were getting low in height from all the sharpening. Went down to Tydan and they looked after me with these blades. Had them rockered and profiled and standard 5/8 hollow used. Couldn't believe the difference in the sharpness on the ice and man do they hold their sharpen a long time. I can go 10-12 games or a month in between sharpens. I would never go back to standard blades. When I was there they had sets of team blades for a wack of NHL Teams set and ready to go out. I was going thru the Canucks blades and all of them had the Canucks logo etched on them plus the players names and #. It was amazing to see that. Great place and its local being from Hamilton.

Seem to be good , profiled at 35/65 I might try a a little less blade on the ice next time. They seem to hold their sharpness longer , which is great.

Landyn’s blade became loose, within a few days the Tydan team had a new set at the door. Now a Tydan for life customer

The replacement blades are of excellent quality, fit perfectly into the holder with no force needed unlike other blades. The quality of the metal that is used is very evident not only in how long it holds an edge but when they need to be sharpened, they are so smooth to sharpen with very little material needed to be removed. The edge radius process used is great and my son noticed the impact in his skating right away. U16 AA defensemen are hard on their skates, these stand up amazingly, thanks for making such a great product at a great price !!

all good except the edges were not quite even, corrected on my sparx machine.

Quick Summary: I had some initial issues that were frustrating / disappointing, but I am giving a 5 star because:
1. Tydan support over email and phone was quite responsive (same day both times) and they also took the time to listen and provide feedback and education.
2. In the end, I got exactly what I had hoped to get.

Full Review:
My newly profiled blades arrived quickly but Tydan forgot my custom engraving. Engravings don't stop pucks or control rebounds, so this was not a significant deal for me. I sent an email and Tydan actually picked up the phone to call me 10 mins later to let me know they would get that taken care of and assure me that they had completed the profile. My first time on the new blades was not the best. I had kept the same radius of hollow, but went with a new profile and I just couldn't seem to find an edge where I was used to having one. After 10 mins of not finding an edge really anywhere, I swapped back to my previous runners for the rest of the practice. Afterwards , I inspected the edge and it felt and looked perfectly sharp. The next day, I took my skates to the best sharpening place in town and had them resharpen the blades and also change the radius of hollow from 1/2 to 3/8 and that did the trick. After speaking to the proshop owner and Tydan, I was able to learn that, with the new breed of super hard steel blades, the first sharpening can be problematic for even the best skate techs. It is not uncommon for the runner to look and feel perfectly sharp, but not provide the on ice performance that they should.

It took a bit, but in the end, I honestly got everything I was hoping for:

1. A profile that has an excellent overall balance to it with solid bite.
2. A taller runner that has given me a more aggressive attack angle.
3. An edge the stands up significantly better to the post collisions than anything else I have tried. I normally sharpen my skates every 4 hours with a max of 6 hours between. So far, I have 5 hours on the latest sharpening and I am still super confident in the edge along the entire length of the runner. Usually, by hour 4 , I have a few spots where the edge has been compromised, so far I have none.
4. Improved crispness in my overall crease movement.
5. Fewer Toe-Push 'slide-outs' and an improved ability to find an edge during a crisis.

Great job profiling my son’s new blades. He loves them and shipping was fast.

ADD ENGRAVING TO YOUR BLADES

The best way to make a blade really yours. Whether adding your team logo or jersey number, our high-quality laser engraving will have your blades looking as good as they perform.

Not sure what blade, profile, and hollow to go with? Answer a few questions and let us help. The best 5 minutes you can spend on your on-ice performance.

With an ultra-lightweight carbon fiber build, the Bauer TUUK Lightspeed Carbonlite Edge Runner will provide the best technology with a stabilizing spine for torsional flex.

What our customers say

Thanks all the advice and the fast turnaround in getting me everything. The 2 sets of Bauer Tuuk LS Pulse Edge DLC with the engraving looks great. I really like the blade pouch, chamois and gummy to keep the blades looking and feeling good.

Holding the edge very well. So far I have played 5 games and with carbon coated blades they had to be ground after 2 games. Very pleased.

Needed a set of blades quickly. Tydan was able to get us a set in 24 hours. My son loves them and wants them for future skates as well.